The PRoblem with PESO

Beginning in at least 2014, and gaining significant momentum in the past 12 months, those who think about such things have been championing the PESO (Paid, Earned, Shared, Owned) model as the way forward for the PR industry.

From Mashable to the venerable Gini Dietrich​ and SpinSucks, it has been rightly argued that the displacement of “traditional media,” the deepening impact of social media on media consumption habits of consumers and other environmental factors, have made a PR practice predicated on media relations obsolete. In order to survive, PR practitioners need to embrace integrated communications strategies that tell brand stories via a mix of Paid (e.g. commercial), Earned (e.g. traditional media), Shared (e.g. viral, word of mouth) and Owned (e.g. company website) communications channels.

While I completely agree with the underlying thesis, the PESO model which treats all four types of channel equally will, I fear, not guide the way to a new era of PR prosperity (#PRosperity).

To my mind there are three disqualifying problems with the PESO model:

The term “PESO” either prioritizes paid channels or treats all channels equally. This may seem like semantics but, as someone who believes that what matters isn’t just what we say but how we say it, the fact that paid comes first problematic. Because if a strategy puts paid channels first, PR probably isn’t fated to play a leading role.

PESO isn’t ownable by PR. Advertisers and digital agencies can leverage the exact same model. It doesn’t provide a competitive advantage that will compel brand managers to invest more of their finite budgets in PR.

PESO isn’t a PR model, it’s an integrated communications model. Yes, they are different. It fails to highlight the unique strengths of PR, including engaging storytelling and third-party authority. While certainly pushing the industry in the right direction (away from a media relations focused paradign) PESO may actually make the role of PR more tenuous in the long-term.

What PR needs is a model that includes all the PESO channels, puts the power of PR first and provides a point of differentiation that will make PR the marketing communications practice of choice for leading brands.

I believe that model is (A)ESOP.

Named after the Ancient Greek storyteller known for creating several fables (Aesop’s Fables) that continue to be retold today, the (A)ESOP model puts deep storytelling at the heart of ALL PR activity in Earned, Shared, Owned and Paid channels. Although it doesn’t represent a communications channel, the bracketed “(A)” is therefore the most significant part of the model. It at once adds the PR art of deep storytelling to the mix, differentiates this as a PR model and, by the dint of its very existence, makes the model even possible.

The order of the subsequent letters E-S-O-P is likewise meaningful. From left-to-right, the (A)ESOP model prioritizes the channels which require the specific expertise of PR professionals. Each channel is important but, for PR, not equally so.

With the exception of a brand journalism strategy (which I will argue in a later blog is actually ownable by PR because it leverages our understanding of editorial story telling – the ‘A’) PR must start with earned as well as the shared channels which require specific (historically learned) PR expertise to identify and form lasting relationships with the community partners and third party influencers (e.g.YouTubers, Instagrammers) who brands must engage with to grow.

In light of this, it’s clear that the (A)ESOP model is a better way forward for PR. And, to that end, in the coming weeks, I will be exploring the role of PR across its spectrum of channels beginning with what I think is the one PR tactic every brand should be investing in for today.

For now, however, I’ll end with this. Assuming that at least some of you reading this enjoy a visual model as much as I do, I’ve taken a stab at rendering (A)ESOP below. As you can see, it represents a marked change from the clover leaf PESO model. Instead, (A)ESOP is represented by concentric circles which are anchored by storytelling and surrounded by paid media which truly is the broadest reaching channel and, thus, appropriately positioned to pull a maximum number of consumers into brand stories. The (A)ESOP model also contemplates the dynamic movement of consumers through brand stories which, if I do say so myself, is a big omission from PESO. 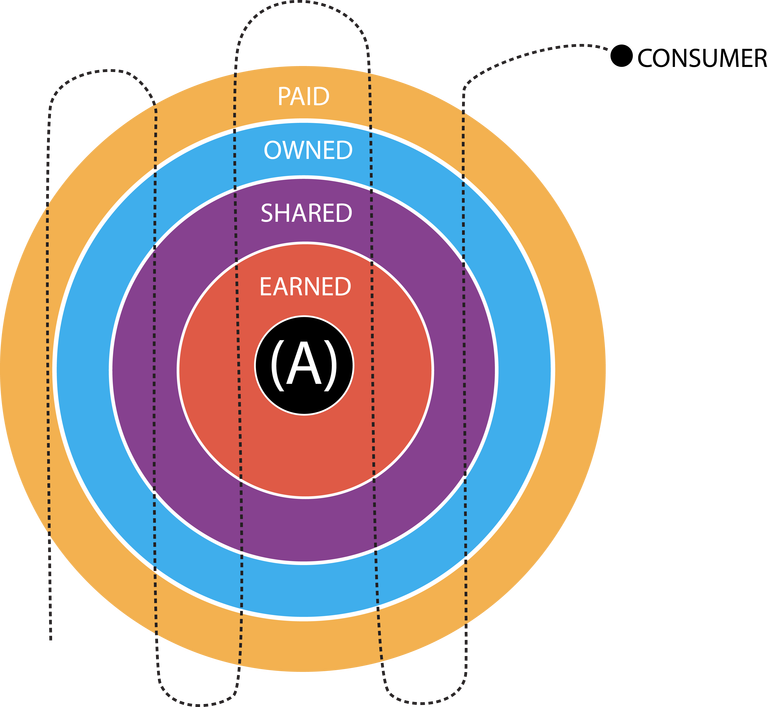 The (A)ESOP Model for PR

That’s it for now. Please Tweet, Gram and link to this blog to support the #PR (A)ESOP revolution! I hope you’ll stay tuned for more explorations of the role of PR in a social world.

We would love to collaborate with you on news-making, industry-leading, brand-building PR programs. Please contact us here to start the conversation!

How to Turn Complex Data into Engaging Stories