Risks and Rewards for the Social CEO

Why is it so difficult to find CEOs on Twitter? This question first sprang to mind several years ago when a client asked our Strategic Objectives team to provide a list of Canadian CEOs on Twitter. It didn’t take long to discover there were very few Canadian CEOs, nevermind CEOs anywhere in the world, who tweet.

Sure there were a few high profile international showmen, like Sir Richard Branson @richardbranson, a CEO who’s the living embodiment of his Virgin brand; numerous techies; a slew of marketing pros; and Canada’s Kevin O’Leary, @KevinOLearytv, who is currently running for the leadership of the Conservative Party of Canada.

But the fact remains, CEOs on Twitter are few and far between; and, there is NO definitive list of Social CEOs. We know, we looked!

Listaholics that we are, our Strategic Objectives team set out to develop a comprehensivelist of Social CEOs, and to discover who, when, where, why and what they’re tweeting. We’ve been list-building ever since.

Our initial research found that 70 per cent of corporate CEOs have absolutely no presence on any online platform; and that only four per cent of Fortune 500 CEOs have Twitter accounts, according to this study by Domo. This prompted us to ask several important questions:

Our research shows there are definitely some big name CEOs on Twitter, but they are a distinct minority. The vast majority of socially-active CEOs are either in tech, run marketing agencies, or sell services. This should come as no surprise since it’s in the nature of those businesses to get ahead of the curve and lead, rather than follow, when it comes to social engagement.

CEO Rewards: Why is being social SO rewarding for brands?

Social brands can reap measurable rewards from community-building – a primary function of being social. CEOs, by embracing social tools like Twitter, can connect directly with their employees, consumers, shareholders and stakeholders, not to mention the traditional and social media, through reciprocal, two-way, P2P (person to person) communication.

Twitter also gives CEOs the power to humanize and give personality to their brands. They are the face of their company, and tweeting allows them to engage with many important audiences on a remote, yet visceral, playing field. This all contributes to credibility and trust-building. A consumer survey by BRANDFog supports this and indicates, “more than 82% of respondents are likely, or much more likely, to trust a company whose CEO and team engage in social media,” 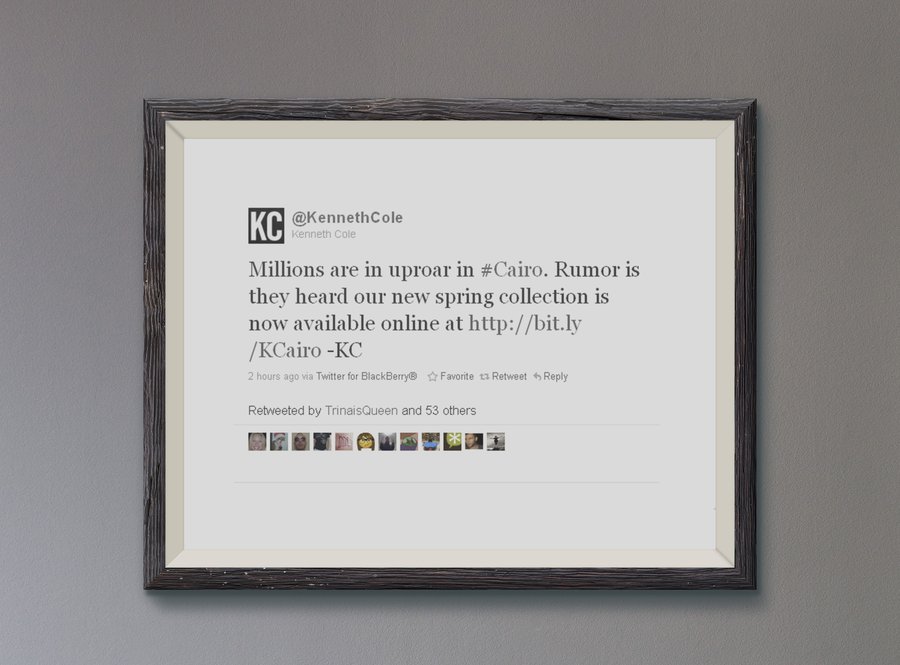 Mr. Cole’s opportunistic tweet triggered world-wide criticism for his brand and unleashed a torrent of negative feedback – including calls for a boycott.

CEO Risks: So why are there SO few CEOs on Twitter?

As with all things business, there are risks that accompany rewards when it comes to being social, and they, quite simply, must not be ignored. We live in an age of instant news, where everything we do and say can be broadcast to the world in a matter of seconds; and it only takes one misstep, one ridiculous negative incident to taint your brand.

A well-known CEO, social activist and do-er of social good, fashion designer/retailer Kenneth Cole serves as a textbook example of Social CEO blunders. In February 2011, Mr. Cole newsjacked/made-light-of the violent protests that we now call Arab Spring, then underway in Cairo, Egypt, with this memorable tweet.

This cautionary tale clearly shows how one poorly-conceived CEO tweet can lead to costly, negative repercussions.

Time, and the lack of it, is another reason CEOs don’t tweet. But business Nimesh Shah believes this shouldn’t be an issue, since one tweet from a CEO is equivalent to 100 tweets from an ordinary person.

“In this ever increasing social world, where reputation can be made or broken with just one incident going viral, it will help companies to have their senior management spend time in this media. Especially the CEO.

“The company CEO can bring in a sense of immediate personalization and advocacy over time by using social media. However, not many CEOs are on the social space, citing time as a constraining factor. True, they have to run the business and a significant amount of their time and mindshare must go there, but social media doesn’t demand much time. If a CEO decides to give out 15 minutes in the morning and evening, he or she would build a formidable presence and following in the social space.

“One has to realize that the effectiveness of one CEO tweet will equal 100 from ordinary folks. It’s the position that lends credence, and users will understand if all their tweets and comments aren’t replied to! The CEO adds credence, star power, empathy and most importantly, creates a differentiation for that brand or company”

We all do! CEOs have valuable experience wielding influence; and have much to share, as well as learn, online. Their decisions impact local, regional, national and global economies; and they have the power to affect and effect change, and change minds. We should make it our business to know what they are saying, doing, and thinking.

Tuning-in to chief executives on Twitter can shed light on who they are as people, who they interact with, and gives us a chance to exchange ideas and engage/converse with them. Social CEOs give access to corporate insights, without mediation, which was never possible before the social revolution, and they are definitely a news source worth reading.

Tuning in to CEOs is a huge learning opportunity. And this is why we created an Ultimate List of Social CEOs of Twitter. It features a stunning roster of 600+ CEOs and delivers a steady, 24/7 stream of biz-minded consciousness from influential leaders around the world.

Interested in using social media to boost your presence and sales? Lets chat! Please contact us here to get in touch.