Largest, most successful fundraiser of its kind supports groundbreaking medical research and innovation 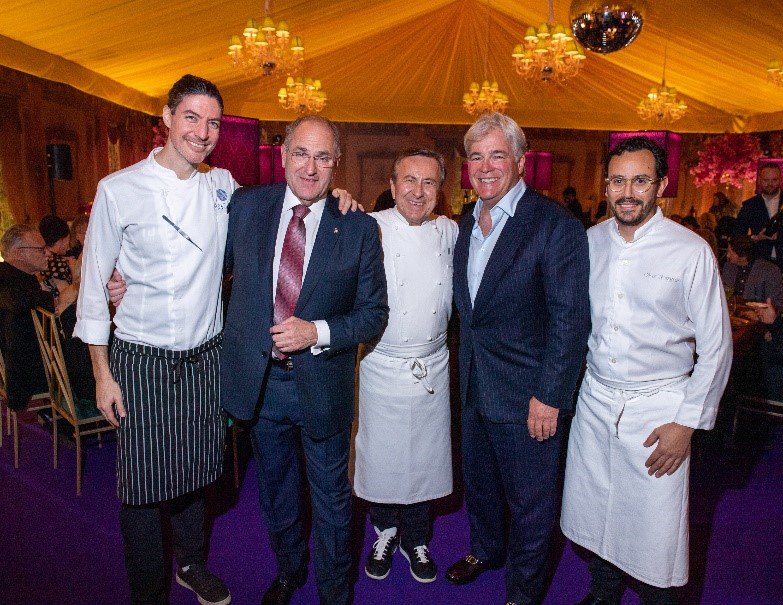 Funds raised include a landmark $52 million donation by John and Myrna Daniels Foundation to construct Canada’s first purpose-built geriatric emergency medicine centre. Slated to open in 2025 at UHN’s Toronto Western Hospital, the Myrna Daniels Seniors Emergency Medicine Centre will be the first of its kind in the world, with every element of the space designed to address the unique needs of older adults alongside research and education programs.

An eclectic and delicious three-day weekend full of festivities, Grand Cru Culinary Wine Festival is the largest event of its kind. For 18 years it has united world-renowned chefs and sommeliers with food and wine aficionados and the brightest minds in medical research in support of UHN’s pioneering programs.

Events kicked off on Thursday, October 27, when more than 90 vintners from around the world treated guests to a unique Halpern Portfolio Tasting, presented by ECN Capital. The spectacular Grand Cru Live Auction featured during the tasting, raised more than $1.3 million. Guests jumped at the chance to bid on rare items, such as large format wines, artwork by Jane Waterous and Edward Burtynsky and an Aston Martin DBX707 generously donated by Grand Touring Automobiles.

“The Grand Cru Culinary Wine Festival has featured the future of Canadian health care on its exclusive menu since 2005, raising more than $127 million. We are grateful for the support of this year’s presenting sponsor ECN Capital, and to the philanthropists, wine makers and culinary talents who support our events and contribute to significant medical advancements in the community,” says UHN Trustee and UHN Foundation Board Member, Todd Halpern, who founded Grand Cru Culinary Wine Festival. At the Halpern dinner, a piece donated by renowned artist Mr. Brainwash was bought by 13 generous individuals for $1.3 million total, to be placed at UHN to commemorate the event.

Grand Cru has supported many recent innovations at UHN, including:

“The incredible generosity of Grand Cru attendees and supporters puts UHN at the forefront of transforming the patient experience, incredible research innovations and enhanced education. Grand Cru has been an outstanding source of support for UHN, and has helped to maintain our hospital’s standing as number four in the world. The event enables UHN’s world leading researchers and professionals to continue their mission of creating a healthier world,” says Tennys Hanson, CEO of UHN Foundation.

For a complete history, photos and further information about Grand Cru, including a full list of sponsors, participating hosts, chefs, wineries and UHN clinicians and researchers, please visit grandcru.ca

Founded by Todd Halpern, Trustee, UHN Board of Trustees and Board Member, UHN Foundation Board of Directors, Grand Cru Culinary Wine Festival is the highest fundraising food and wine festival in the world, bringing together the finest wine, gourmet cuisine, brightest minds in medical research, and UHN donors and sponsors.
grandcru.ca

We are one of Canada's Best Public Relations and Marketing Communications Agencies. Please contact us here to learn how Strategic Objectives can help you craft meaningful, news-making campaigns that amplify your brand message and boost consumer loyalty.